It’s been a pity that in the time he should have been out on the road promoting this new CD, Vin Garbutt was taken seriously ill and unable to gig. There are some cracking songs on this album – traditional rhymes, classic items, numbers written by lesser known songwriters and sterling stuff from Vin himself. There’s even a treatment of Rudyard Kipling’s ‘If’ which spoke to me more powerfully in song than it ever did in poetry. Topically, Eric Bogle’s anti-war song ‘No Man’s Land’ features here – and includes the famous last verse controversially left out in the version made for the 2014 Poppy Appeal. Also on a First World War theme, John Blanks and Mark Addison’s ‘The Fallen Of Fulstow’ commemorates the ‘ten young men’ of that village who went off to fight, never to return.

Accompaniment by the guest musicians is effective, especially Dave O’Neill’s mandolin on ‘Your Welcome Was So Warm’, Vin’s tribute to those who have lodged the much-loved troubadour on his travels. In ‘Teacher From Persia’ Vin covers ground spanning rock ‘n’ roll in Iranian pre-revolution days through to the ‘synthetic hues’ created by ICI in Grangetown. Tees-side and its environs are never far from Vin’s subject matter: he paints a vivid picture with Rob Fortune’s ‘Teesbay’ and pays tribute to Graeme Miles in his late mentor’s song ‘My Eldorado’.

Thankfully Vin’s now on the mend and should be out doing live performances soon. It will be a real treat to hear these songs live.

Synthetic Hues is the latest CD by folk legend Vin Garbutt. It was released late 2014 and is available to purchase directly from Vin. 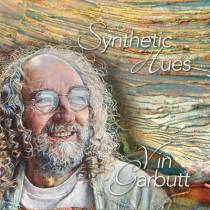